Skip to content
Home NewsLeghorn-based erredue grows with hydrogen and lands on the stock market
News, 29 11 2022 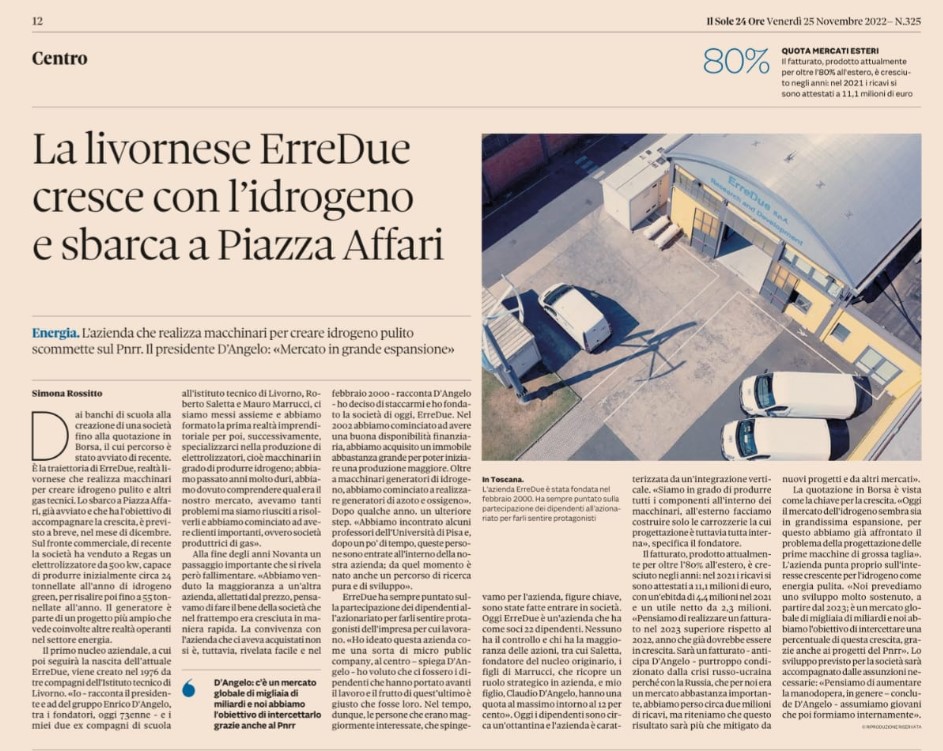 From school desks to the creation of a company to a listing on the stock exchange, the path of which was recently launched. This is the trajectory of ErreDue, a Livorno-based company that makes machinery to create clean hydrogen and other technical gases. The landing on Piazza Affari, which has already started and is aimed at accompanying growth, is expected soon, in December. On the commercial front, the company recently sold a 500-kw electrolyzer to Regas, which is capable of initially producing about 24 tons per year of green hydrogen, eventually rising to 55 tons per year. The generator is part of a larger project involving other energy companies.

The first corporate nucleus, which would later be followed by the birth of today’s ErreDue, was created in 1976 by three classmates from Livorno Technical Institute. “I,” says president and group CEO Enrico D’Angelo, among the founders, now 73, “and my two former classmates at the Livorno Technical Institute, Roberto Saletta and Mauro Marrucci, got together and formed the first business reality and then, later, specialized in the production of electrolyzers, that is, machinery capable of producing hydrogen; we went through very hard years, we had to understand what our market was, we had many problems but we managed to solve them and we began to have important customers, namely gas-producing companies.

At the end of the 1990s, an important step that turned out to be unsuccessful, however. “We sold the majority stake to another company, enticed by the price; we thought we were doing the company good, which had grown rapidly in the meantime. Living with the company that had bought us did not, however, prove easy, and in February 2000,” D’Angelo says, “I decided to break away and founded the company of today, ErreDue. In 2002, we began to have good finances, and we acquired a property large enough to start larger production. In addition to hydrogen generating machinery, we started making nitrogen and oxygen generators.” After a few years. a further step. “We met some professors from the University of Pisa, and after some time, these people joined our company; from that moment on, pure research and development also began.”

ErreDue has always focused on employee ownership to make them feel like protagonists of the company they work for. “I conceived this company as a kind of micro public company, at the center,” D’Angelo explains, “I wanted the employees who carried out the work to be there, and the fruit of the work was rightly theirs. So over time, the people who were most interested, who we were pushing for the company, key figures, were brought in. Today ErreDue is a company that has 22 employees as partners. No one has control, and those who have the majority of the shares, including Saletta, founder of the original core, Marrucci’s sons, who play a strategic role in the company, and my son, Claudio D’Angelo, have a stake at most around 12 percent.” Today there are about 80 employees, and the company is characterized by vertical integration. “We are able to produce all the components inside the machinery, outside we only have the bodies built, whose design, however, is all in-house,” the founder specifies.

Turnover, more than 80 percent of which is currently produced abroad, has been growing over the years: in 2021 revenues stood at 11.1 million, with ebitda of 4.4 million in 2021 and net income of 2.3 million. “We expect to achieve a higher turnover in 2023 than in 2022, a year that should already be growing. It will be a turnover,” D’Angelo anticipates, “unfortunately conditioned by the Russian-Ukrainian crisis because with Russia, which was a fairly important market for us, we lost about two million in revenues, but we believe that this result will be more than mitigated by new projects and other markets. “The stock market listing is seen as the key to growth. “Today, the hydrogen market seems to be booming, so we have already addressed the problem of designing the first large machines.” The company is banking precisely on the growing interest in hydrogen as a clean energy. “We foresee a very sustained development, starting from 2023; it is a global market of trillions and we aim to intercept a percentage of this growth, thanks also to the Pnrr projects.” The company’s planned development will be accompanied by the necessary hiring: “We plan to increase the workforce, generally,” D’Angelo concludes, “we hire young people who we then train internally.

This site is registered on wpml.org as a development site.